“You will never be alone. Stop chasing shadows and just enjoy the ride.”

Those words stay in my mind like a stain that never fades. As I walked through the sturdy halls of BethenCourt High, I tried not to remember the horrors of last year. I still can hear Amy Winehouse’s, “You know I’m no good,” acoustically blasting from Natalie’s second floor dorm room. Her lifeless body hanging from the ceiling fan incessantly occupies my thoughts, torments me at night and I relive that horrific Halloween night every single day. 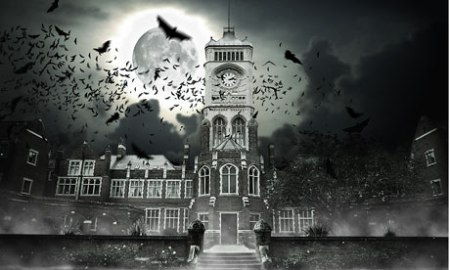 Natalie was my best friend and lover. It’s hard not to recall those bitter-sweet memories of us because I will always be reminded of them.

We both attended a really strict, religious, all-girl boarding named BethenCourt High. It was a place for prominent affluent families to send their spoiled misbehaved girls to be reformed into respected educated women. There’s that stereotype or perhaps myth that an all-girl school spurs homosexuality but BethenCourt prided itself of not being sullied by what they called an abomination.

“Homosexuality is a sickness,” said our prestigious headmaster, Mrs. Rosethorne during our first year orientation. She is a pit bull faced vicious woman who loves to wear pink. She is keen on enforcing strict and questionable policies that can’t ever be disputed. She runs the school like a dictator, even Hitler would be scared of her. Her white Persian cat, Bubbles, isn’t a peck of sunshine neither.

“Hazel!” someone screamed out my name. I knew that voice; it was Natalie Singborg. It was our year at BethenCourt. We had both been out of control; doing drugs, partying too much and shopping too much so our parents shipped us off to BethenCourt. I turned around and she came running up to me. She planted a sweet kiss on my lips. A kiss I’ll never forget.

I pulled away from her scared of who would see. “Aren’t you worried we will get in trouble?” I whispered, my heart skipping a beat. She just laughed.

“Did you miss me?”, Natalie asked.

We had our first class together so we walked there holding hands. News travels fast in BethenCourt so it was no surprise when we were called to the headmasters’ office during our first class.

“Sickos!”, someone yelled out as we headed for Mrs. Rosethorne’s office. Rosethorne was furious. She didn’t even want to look at us. She immediately called our parents and sent us to counselors in hopes that they could cure us of our “sickness”. My  parents didn’t bother to come no call. Natalie’s parents were outraged and they blamed me for “infecting their daughter,” as they said.

It was Natalie who had kissed me first. I don’t want to say she seduced me but she made the first move. I never paid any attention to guys in a romantic way, that is. I was always a tomboy and knew deep inside that I was a lesbian.

“How could you do this to our daughter?!”, Natalie’s mother screamed at me. I looked over at Natalie and she had tears in her eyes. Her mother hated her; she never wanted to have her. At that moment I just wanted to hold her. Then Rosethorne, as punishment, had our schedules changed and moved me down to the first floor dorm rooms.

After that we were harassed for weeks. Girls would spit at us, throw our books from our hands, pull our hair and other evil things. We also received threatening emails and letters. Natalie started getting high every night and cutting herself. Her family had told her if she kept seeing me she was to be disowned. However, we still manged to sneak around and see each other.

The day before her death, we had walked through the school gardens. I should have known something wasn’t right. She seemed distant. Her eyes were puffy from all the crying and for a long moment we just embraced each other underneath the stars.

The next day a shrilling scream came from the second floor. All the girls had been taking pictures of their Halloween costumes when they heard the screams. Everyone rushed up to discover Natalie’s lifeless body hanging from the ceiling fan. When I saw her I just incessantly screamed. I think I passed out because I woke up in the medical ward.

A strange letter lay on my stomach. It was vintage paper sealed with a red wax seal. I gliding my finger through it to open it. On it it read, “You’re not alone.” At that time, I didn’t know I was going to be part of a secret society that was as old as the school.

“You will never be alone. Stop chasing shadows and just enjoy the ride.” Those were the last words she said to me. They stay in my mind like a stain that never fades.