Kauffman came into my room briefly this morning with Demetrius and a new orderly.  They dragged me to the seclusion room on the third floor. I screamed all the way there. It was not a great place to be, well for me that is. I hated being in the dark. I dreaded going there again.

The third floor had dimmer lights than the rest of the building; that’s where they kept the psychopaths-the morbidly deranged. I heard them scream in madness all those dark souls and for a moment I thought I would join them. I refused to succumb to their madness. 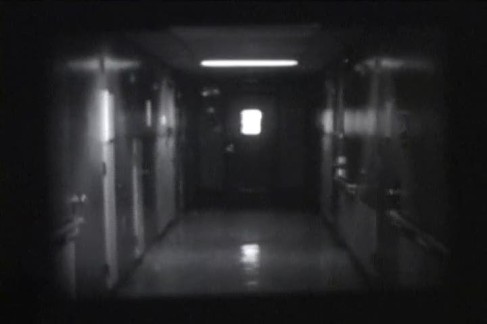 “Hey little girl, come back and play!” a convicted serial killer laughed. Demetrius and the new orderly forced me to walk faster. We reach the steel door that requires 6 gold plated bolts to keep it secure.  It was a small dark room with black walls and one light bulb that flickered all the time. The walls were covered with disturbing art from the other patients who had been exiled there. There were even stories of patients dying there and ghosts haunting the room.  I beg Kauffman to reconsider but he ignores me. I cry hysterically.

Demetrius and the new orderly try to pull me in but I hang on to the door like a 5 year old.

“No!” I scream. They are pulling me from my legs now and I’m holding on to the side of the door for my dear life. Kauffman begins to pry my fingers off the door and I am pulled into the room, defeated. I curl into a fetal position at the back left corner of the room and shiver.

“This is not a punishment. I am really trying to help you” I hear Kauffman say but am too busy crying to even acknowledge him. Kauffman leaves a few blank white pages and a box of crayons on an old wood student desk in the middle of the room. He tells me he wants me to draw something and heads out the room with Demetrius and the new orderly. The closing of the door as the bolts clank in place makes me even more delirious. The fact that he didn’t tell me how long I would be in there causes me to hyperventilate.

The only light bulb in the room starts to flicker, elevating my forthcoming panic attack. I remain in the corner not moving one bit. Somehow I fall asleep for a while; don’t know how long, though. There are no windows in this room or a clock, so I am oblivious to time here as well.

Before Kauffman had left, he had placed an old tape player on the student desk to play both Beethoven and Mozart. I suppose the music calmed me down. After waking up the first time, I began to cry again, realizing it was not a dream. I was actually in that room in the dark with just a glimmer of light from the incessantly flickering bulb in the middle of the room. I cried and cried for hours, begging for someone to let me out. No one came.  All that crying made me sleepy again. I went back to sleep for a second time. I don’t know for how long I slept that time either.

When I awoke, I begrudgingly crawled my way to the student desk and pulled myself onto the chair. It creaked and rocked from my weight. I considered my options. Perhaps Kauffman was watching me through a camera in the room and if I didn’t do what he said I would stay in here forever. I stared at the art on the wall in front of me created by past patients, most of which depicted suicide and other disturbing images. The ones who used a lot of the black and red crayons were the broken souls on this floor. There were a few rainbows and happy faces but only a few.

I think about what to draw, scratching my head with a blue crayon. I decide to look at the art on the wall instead as I slip out of the chair and make my way towards them. So much pain on these walls, I think to myself. Like I said beforehand, many of these cried out their suicidal tendencies. The more deranged ones drew dark images of a homicidal nature. Then there were the ones who just wanted to go home, like a patient named Emily, who drew a picture of her family.

It was the typical family picture a kindergartener would draw; a house with a white picket fence with the whole family lined up in front, smiling. There was also a dog there too. She even wrote the words, “I want to go home” in the green grass in black crayon. Emily had a personality disorder. She had murdered her whole family with a machete seven years ago on Christmas Eve. They never figured out why.

Tears streamed down my face as I slipped my hand through all the artwork, feeling all their pain. I went back to the chair and sat there, just staring at the blank pages on the table. I thought about Henry and what Demetrius had said. He had seen him too.

“That’s it!” I exclaimed.  I decided to draw a portrait of Henry so I could show it to Demetrius and confirm my story to Kauffman. Then he would see that I wasn’t crazy. A few minutes into the sketch, I hear the door unbolt and in comes a tall skinny blonde hair nurse with my lunch. It’s only lunch! I thought I had been in there for hours. The nurse smiles at me and places the tray of food to my right side. I smile at her for not covering my drawing with the tray. I guess some people still have manners.

I barely touch the food because all I want is to finish my perfect portrait of Henry. I make sure to accurately emphasize on his deep blue warm eyes, blonde hair, strong jaw and full lips. When I am done, I trace my fingers on his lips, pretending he is there with me. More hours pass by and I fall asleep once more. The door opens a few hours later, jolting me up from my sleep to see Kauffman walk in.

He doesn’t talk to me as he grabs for my sketch of Henry. He looks at it for a few seconds with a stern look upon his face, and then calls for Demetrius who is told to take me to the cafeteria for dinner. Kauffman was being cold to me and I didn’t know why. Then the strangest thing happened, Demetrius smiled at me. I was taken aback by this because he never smiled. I found this rather peculiar.

I didn’t feel much like eating. Knowing my chances were slim, I asked Demetrius if he could let me hang out in the community room instead. He of course, said no at first. It was forbidden to miss a meal because they gave us our medication with it. A few moments later, Demetrius, to my surprise, changed route whispering the following into my ear.

“Only this time” he said as we made our way to the other side of the building back down stairs to the main floor. We walked through the long empty hallways in silence. I stared at the floor as I walked. I wasn’t particularly happy after spending most of the day locked up in a dark room.

About 20 minutes later, we reached the dark green doors of the community room. It was empty with the exception of the attending nurse who was enclosed in an office with glass walls. She looked at Demetrius who gave her a non-verbal sign which she acknowledged in agreement by nodding her head.

The community room was filled with vintage chairs, sofas and TV’s. The walls were covered in an out-dated floral wallpaper. It was like you were being transported back to the 70s. I made my way to a leprechaun green sofa that faced the largest of the four TV’s in the room. I didn’t bother to turn it on, I just stared at the dark screen. Demetrius went over to chat up the nurse, always having a watchful eye on me, though. I curled up on the sofa, my eyes growing heavy and falling asleep once again.

During my short nap, I had a nightmare or maybe it was a flashback. I couldn’t really be sure. I was holding a knife and was covered in blood. I heard water running and police sirens in the distant. There is a man dead on the floor but can’t make out his face. At that moment I lose the image as Demetrius furiously shakes me, waking me up. He is now dragging me back to my room. There has been a murder. One of the dangerous patients has stabbed a nurse and they are ordering a lockdown.

Hurrying back to my room, I can’t help but wonder if what I dreamt was a memory or just a nightmare. Nothing is clear. I have to figure things out soon because I don’t have much time. Kauffman is growing weary of me; I fear he will give up on me. I fear being exiled back onto the third floor. I’ll die there. Third floor residents don’t last long; they always die of mysterious causes or go missing after a few years. Nobody ever knows what happens to them. Two nurses rush past us, looking scared. I knew who they were afraid of. I knew who stabbed that poor nurse. And I also knew he would disappear sometime soon.