I’m watching the snow fall. My face is pressed against the left glass wall of the main floor, overlooking the garden which is now completely covered in a beautiful white blanket of snow. Sometimes they let me walk around if I’ve been good but always under the watchful eye of Demetrius. Demetrius was a steroid pumping, six foot four orderly from Russia, covered in tattoos. He was known for abusing his authority and had a really bad temper. He loved to physically abuse patients if they didn’t adhere to his way of doing things. He never hurt me though, but I didn’t receive special treatment either. Through my periphery, I saw him take out a cigarette and light it. The hall was empty; everyone else was at lunch or in their rooms. I had eaten my lunch in my room and he had come to surprise me. He knew I liked looking outside. 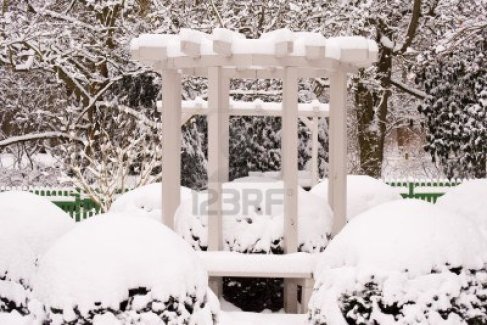 I yearn to go out and feel the cold on my skin and throw myself onto the ground and make snow angels. They rarely let me go outside; not since the attempted suicide incident when I was first emitted. It was my first Spring here, and they had taken me out to the garden. While walking around, I noticed a sharp rock by an old oak tree and picked it up without anyone noticing. I attempted to cut my wrists but was stopped by two nurses. I was more deranged then.

After that they never let me out, even now I am restricted to these walls. It is maddening really to watch those who can go outside in the Spring and Summer. I envy them. I always plead with them to let me go out but it is futile. This of course drives me into screaming spells which results with me being drugged and locked up in my room.  I cringed at the thought of it.

“Time to go back Lizzie” Demetrius says to me in a strong Russian accent. I didn’t like people calling me Lizzie but I wasn’t going to tell him that. I didn’t want to see what happens when you talk back to him. I was very comfortable with our arrangement. He grabbed my right arm a bit too hard as he led me back to my room. When we got there, he shoved me in and slammed my door shut. I stayed in there until it was time for dinner. This time it was Janice who got me and took me to the cafeteria.

Janice was obnoxious and loud. I towered over her but she was a big woman with very strong arms.  It was around 6:30 p.m. when I got my last meal for the day. I decided to sit at the far right corner of the cafeteria. I was one of the few patients that actually got to eat outside of their rooms. Most patients were fed in their rooms; some were too dangerous to let out. When I was first emitted, I was one of those dangerous patients who reside on the third floor. My tray was slid through an opening in the door and sometimes the orderly would be cruel and shove it in. It would spill the contents on the floor and I would have to eat it.

Then one day, Molly, a shy, petite nurse, came into my room with my lunch. She wasn’t afraid of me. She was nice to me and sat with me as I ate. I took a liking to her right away. The Director was impressed at how Molly had tamed me, that I was given cafeteria privileges. Come my fourth evaluation by the former psychiatrist (which I don’t recall ever meeting) I was moved to the first floor.

Now I sit in the far right corner of the cafeteria, staring at my food tray. It consists of macaroni and cheese, mashed potatoes, chicken breast, fruit bowl and a box of orange juice. I’m not hungry. I think about throwing it out but pick up the plastic white spoon instead and shove it into the mashed potatoes, putting a good heap of it into my mouth.

I eat everything in record speed even the juice is gulped down in less than a ten seconds. I sense someone watching me and turn my head slightly to the left to see Kauffman staring at me. When he sees me looking back, he smiles at me. I quickly turn my head back to look at my now empty food tray and blush a little, glad that my long red hair covers my face.

“Henry!” I yelp as I jolt myself off my seat and look around for him. Everyone turns to look at me. I see him across the room and rush to meet him but am stopped by three big orderlies. I fight them screaming for Henry but when I look back to where I had seen him, he was no longer there. He had slipped away once again. I see a nurse inject a needle into my right arm and soon I start to feel sleepy. I am carried off back to my room, locked in for the remainder of the day.

Kauffman comes into my room a few hours later, looking rather frazzled. He hadn’t been sleeping much with my sudden drawback and his ever growing patient list. Despite his lack of sleep and stress, he still managed to keep a smile on his face. Behind him was Victoria or as she called herself now, Marissa.

“How are you?” Kauffman said to me with a smile.

“What happened with you tonight?” He continued to ask.

“I swear he was there!” I exclaimed. I went on to tell him of how I heard Henry call out to me and how I had seen him across the cafeteria by the far left exit door.

“I see…” Kauffman said in a low voice.

“We’ll talk about this further tomorrow morning” he went on to tell me as he turned to exit my room.

“Who is this Henry she speaks of?” Victoria whispered to Kauffman when they were out of Elizabeth’s earshot.

“Henry Betzel, but the thing is there is no record of him. I’ve done my research on her story. He doesn’t exist” Kauffman said to her with a sigh.

“No” Kauffman responded with a yawn. I sat in my room, knees tucked in, shivering. I saw Henry with my own eyes. I wasn’t crazy or maybe I was. If only they had let me reach him. I didn’t sleep that night. I couldn’t.