Perpetual blurred images swarmed my mind while I lay on the cold granite floor as I took another hard kick to the stomach. 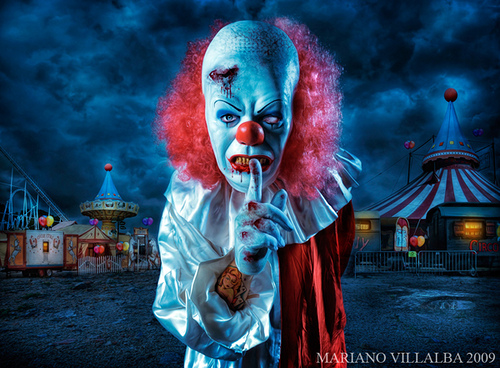 “Freak!” Burt and his friends taunted me. Burt had always warned me that one day he would get me for getting him suspended last year. He was the bully of the school and hated me the most because I was the “weirdo.” I had no friends, wore unconventional clothing which was mainly all black, and was infatuated with witchcraft. My fellow peers would spit at me, throw rocks at me, and one time Burt had his pit-bull chase after me. I had to get 16 stitches on my left leg. My parents sued his parents and we got a huge settlement. That was last year, our junior year. The school got notified of the incident and they suspended Burt for a month. I was hoping they would expel him but that wouldn’t solve anything. He would come after me after school since he lived just four houses down from me.

I tried to get away but I felt someone grab my legs and pull me back. The jagged rocks underneath me scrapped my arms, hands, and face. I will not let them win, I thought to myself. Painfully, I turned around and kicked Jason in the face then made my way out of the menacing circle. Burt and his friends screamed after me.

“You’re dead, freak!” I heard Jason yell at me. Suddenly, a thick fog engulfed the town. All I could see was the thick mist. I also realized that I couldn’t hear or see Burt or any of his friends. I continued to move towards what I thought was Clementine Street, but there was nothing to see to prove the latter. Staggering like the wounded animal that I was, I felt like I was going to pass out right there and then. How could they ambush a girl like that?! I thought to myself. The anger started to build and revenge consumed my thoughts.

“They will pay” I heard someone whisper. I rapidly turned around but there was nobody in sight.

“Ouch” I said as I bent over in pain. I didn’t know how I was going to get home in this fog, Burt had trashed my phone so there was no way of calling anyone to get me. Even so how would anybody find me in this fog if I did manage to find a way to contact them. I decided to keep walking north, hoping I was right about where I was walking towards to. About a hundred yards in I saw a dark figure about six feet away from me.

“Hey!” I screamed as I made my way to it. As I drew closer I realized that it was a person but this person was dressed in a clown suit with a head full of curly red hair. Its head turned slowly towards me and it smiled. A freaking clown?! I stared at it not knowing what to do or say. Then it motioned for me to follow it. I caught a glimpse of a bloody finger and felt a shiver run down my back. This was too creepy.

“Got you!” someone screamed as I felt strong hands grab me from behind.

“AH!” I shrieked as I jumped in fear. It was Burt and his friends, again.

“Shall we continue, Madora?” Jason smirked at me.

“Hey, is that a clown?” one of Burt’s friend’s excitedly asked.

“Oh my lordly, it is a god awful clown” Burt responded sarcastically. The clown yet again gestured for us to follow it.

“Let’s go see what this clown wants” Burt exclaimed as he ran after the clown with his friends not far behind. I wanted to yell after them not to go, but they had already disappeared through the thick fog. Something just didn’t seem right about that clown and this thick fog that seemed to get thicker with every passing moment. I felt a terrible panic attack coming on. What if I never find my way back home?! I didn’t want to be all alone so I ran in the direction Burt headed after the clown. I ran for about ten minutes when I was on the verge of giving up because there was nothing in sight but fog. However, I decided to keep going and that’s when I saw the patch of green grass. Of course, I ran straight for it and was shocked by what I saw next.

There surrounded by the thick fog was a ghastly deserted circus with a huge golden ferris wheel.Where did this circus come from?! I thought to myself. As I entered its grounds, I saw an old sign that looked like it was from an ancient time. It took me a while to decipher what was on it but I finally figured that it read, “The Silent Circus.”

“The Silent Circus” I read out loud.

“Creepy, huh?” someone asked behind me. I turned to face Jason.

“Yeah, it is. How you think it got here?” I whispered.

“Who cares? We going to trash it anyway.” Burt interrupted. I felt that cold shiver again running down my back when a silver dagger came flying and pierced through the skull of one of Burt’s friends. This was the first time I ever saw someone die and I was known for having a weak stomach. I steered my body opposite of the dead body and crouched over while I vomited.

“We have to get out of here!” I bellowed in pain. The opening had disappeared and we weren’t sure from where we had entered exactly. We were trapped.